After a long and arduous drive across South Dakota, we were expecting more of the same for the next part of the trip. We were, however, pleasantly surprised with the change in topography. Where there were wide, flat plains before, there were now beautiful rolling hills (or mountains, depending upon your perspective) with trees. The road began to curve quite a bit more as well, thus slowing our already stately progress. Our objective this day, was first to hit Devil’s Tower and to finally end up at my sister’s place in Laramie.

The first part of the trip again started a little slow. This was primarily due to our difficulty with breakfast. It seems, that if you want a fast breakfast in “Rapid” City, you must avoid IHop. We chose an alternative, which was passable but not recommended. Moving on, we travelled north through the aforementioned rolling hills towards Wyoming.

Along the way, we decided that we should make a token stop at the city of Sturgis, SD where the biker rally is held.

Getting our first view of Devil’s Tower was impressive. It rose from the ground like a wart on a witch’s nose. 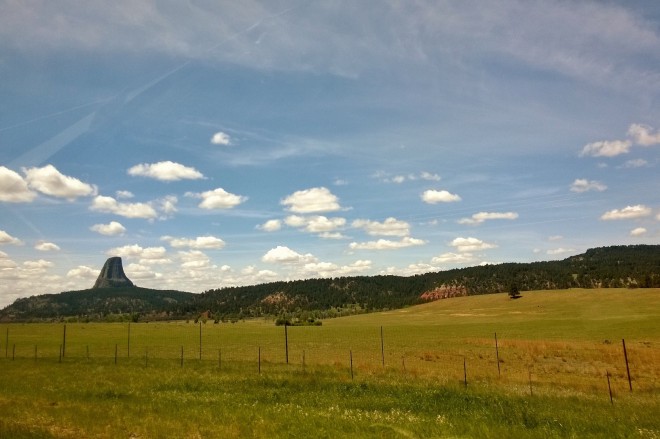 The formation is very interesting up from and seems to be out of place when contrasted with the rest of the land features of the surrounds. We took a hike around the base gathering even more pictures, some of which I will post later. After wasting much time milling around, we moved on to hurry to my sister’s in time for dinner. We almost didn’t make it in time.

Now, after leaving the tower, Wyoming changed and became even more boring and flat than South Dakota. Eye-numbing flatness… We chose a route which put us on a back road, but cut at least 30 minutes off the drive. However, I neglected to make a bathroom stop at the last civilized town on the interstate… and we drove for the next 2 hours or so needing to stop for a restroom. Imagine, however, a place with no pit stops, no gas stations, no rest areas, no pull offs, not even any trees to hide behind while “communing with nature”…

We finally made it to Laramie and had a great dinner with family and got to spend some time staying up a little late. We also left late this morning, but that was so that we could spend even more time with them.

Thank you, Mandy, for taking some time off work to spend with us! I type this now in the McAllister’s where my niece Brittany works and we’re finally getting on the road for Day 6.